Type 2b: Scale Around Storage

So to be clear, this is not an accepted industry term. In fact, by googling "Scale Around Storage" it appears no one is using this terminology. So why am I using it here? The more standard terminology for this class of arrays would be the same as type 2a- Scale Out. While it is accurate, these arrays have a significantly different architecture and design considerations that make them different enough from the scale-out systems we already talked about to warrant their own category.

What about Monolithic, Enterprise, or Mainframe class?

Yes, some of these arrays have previously been called those names, but there are others (like the IBM DS8000) that has been called all three of those things, but is architecturally a type 1 dual controller array.

The Flow of write IOs through a scale around array can vary somewhat, but as an example IO through a VMAX generally goes like this: 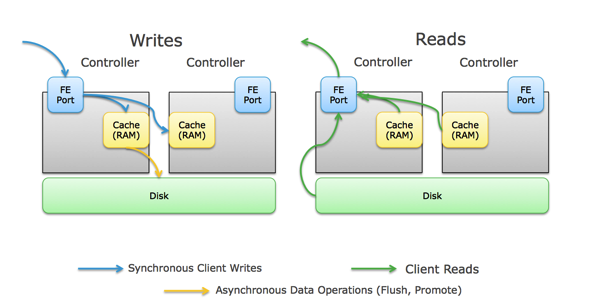 The flow of read IOs is similar:

Characteristics of Scale Around Arrays

As you may have noticed, I have not called out one architecture as 'the best.' Like most things, there are engineering tradeoffs that are made, resulting in products that are better at some things than others. The real caution I can provide you is if some vendor tells you that they don't fit into any of these categories and they can do everything very well, they're either lying or uninformed themselves.